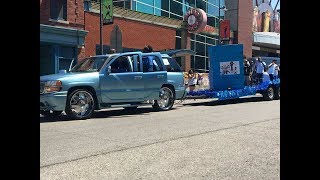 Back to School Rally

A group of teens in Kansas City, KS has opened a new business. The store has been open a little more than a month, letting students come in after school to play video games and unwind. It's part of an after-school program aimed at teaching kids to be entrepreneurs. The teens have taken a storefront, used only for storage and turned it into Snack Shack KC. Games, laughter and snacks, it's exactly what Nancy Mascote and other KCK teens had in mind when they brainstormed the snack shack two and a half years ago. When the idea was originated, Nancy was a sophomore and part of a social entrepreneurship program led by a local nonprofit called Youthfront. “We talked about our neighborhoods, the positives and negatives of our neighborhood,” Youthfront mentor Amber Booth said. The kids saw a need in their neighborhood, KCK's Argentine community, and wanted to think big. “We saw a lot of abandoned buildings and lack of youth places to hang out,” Nancy said. “I thought they'd just be like, ‘let's pick up trash,’ but they were like, ‘let's start a business,’” Booth said. The group's solution? A place for kids, by kids. The teens worked to find an empty space, fixed it up and run it themselves, like a small business. “It's exciting to know we did this on our own,” student Rhiannon Devoe said. “This would have been a place I hanged out at when I was in middle school or high school,” Nancy said. A sign on the door says it all, ‘Students, this place is for you.’ “We want to create an environment where they can feel safe and have fun and feel like part of the neighborhood,” Nancy said. Snack Shack KC, located at 3112 Strong Avenue.